I Love an Addict 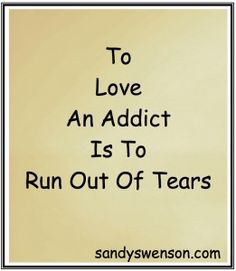 When I first read the following piece, I was reminded of Libby Cataldi's Memoir Stay Close. Knowing when to stay close and when to set your boundaries can be extremely difficult. The above meme by Sandy Swenson is from her memoir The Joey Song. I highly recommend the book for anyone who is struggling with what to do with a loved one who is an addict. It isn't a redemption story; however, it gives valuable and insightful advice on recognizing how you are equally as powerless as the addict and how easy you can enable their addiction and how not to enable them, which is the first step in finding your own path to wholeness and peace. Once you find it, you are better equipped to help them.

I love an ADDICT

I wish it wasn’t me who was writing this. I really wish it wasn’t. I wish I wasn’t handpicked because I have one of the “best handles” on this subject. I wish I wasn’t “qualified” to speak on the heroin epidemic that is a growing problem nationwide. I wish I wasn’t a member of a community no one really wants to be a part of. No one ever says to themselves while reading stuff like mine, “I wish I could relate to this."

But I am. I am the non-addict who knows all too well what it’s like to have an addict in the family.
I know what it’s like to worry yourself sick. To cry yourself to sleep. To stare at baby pictures & reminisce. To check on them while they sleep to make sure they are still breathing.

I know to watch out for pinhole pupils and subtle changes in behavior. To listen to them talk and make excuses and pile on lie after lie. I know what it’s like to pretend to believe them because you are just too mentally exhausted for an argument when you know they are lying straight to your face.

I know what it’s like to be confused all of the damn time; to see their potential, to know what they are throwing away.

I know what it’s like to want their recovery more than they do. To be the one doing research on rehabs and other outlets for recovery.

I know what it’s like to miss someone who is still standing right in front of you.

I know what it’s like to get the worst news of your life, and still walk into the grocery store and run your errands and smile at the cashier.

I know what it’s like to become a part-time detective. To snoop through drawers and texts. You know you are going to find something, and you look until you do just so you feel less crazy. So you can say to yourself, “I am not paranoid. This is happening again.”

I know what it’s like to stop caring about your own personal and professional life. My relationship took a backseat, Christ not even the backseat – I kicked him out of the car. I would show up to work not showered and with huge bags under my eyes. I would cry at my desk. Everything the outside world expected of me seemed frivolous if I couldn’t keep one of my most important people in my life out of harm’s way.

I know what it’s like to scour a bookshelf and not find what you are looking for because this illness is still so hard to talk about, let alone write about.

I know what it’s like to hear someone argue that addiction is not an illness, that it is a choice. I know all too well that feeling of heat rising in your face as they go on and on about something they know nothing about.

I know the difference between enabling and empowering. I know there is a fine line between the two and the difference can mean life or death. I know what it’s like to the feel the weight of each day on your shoulders trying to balance the two.

I have been through enough to know that things don’t just change for the worse overnight; they can change in a millisecond. In a blink of an eye. As quick as it takes two people to make a $10 exchange.

I don’t know what the future holds for anyone who loves an addict today. One thing I know for sure is I am not alone.

Anonymous
Posted by Fortifying Your Castle at 2:39 PM No comments: 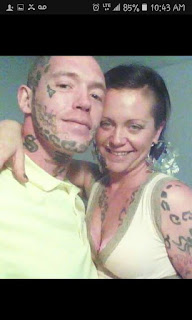 Stephanie Lynntala Forrester is one of the strongest women I know. She has won some battles and lost others, but she keeps her head held high. Most of all, she is making a difference. She. Is. The. Change! She is fighting heroin addiction here in Rochester by fighting the stigma and making her voice heard. Stephanie lost her husband, Justin, a few months back from a heroin overdose. Her ability to keep her sobriety through one of the most difficult challenges in life,  the death of someone she loved so desperately, proves her strength.

On April 22, 2017, at 1:00 PM, there will be an Addiction Awareness Walk in Memory of Justin in Manhattan Square Park on Court Street. If you want to take up the sword with Stephanie and fight the addiction epidemic or if you want to help bring awareness to addiction in Rochester, let your voice be heard and join her in the park. We can’t bury our heads in the sand any longer. People are dying. EVERY DAY!  No one is listening, but if enough of our voices raise the cry for change, hopefully, we can make a difference.

If you want to view a touching video of Justin dancing with his daughter, click on the link below. I am sure it is one his daughter will remember on her wedding day.

Below is Stephanie’s story. Hear her beautiful heart, and absorb how much she has been through, yet she remains strong in her sobriety.

My name is. Stephanie (Neffy). I am 165 days sober today! My drug of choice is IV Heroin (but I'd do any and everything I could). I grew up with two amazing parents, Sharon & Leo Farnan, and an older sister, Erin Hoffman. I was adopted by them when I was 14 months old. I had my first daughter on December 10, 2002, and she passed away December 11, 2003. (Not from drug use).

I guess I'd say I was a functioning addict since I was in my mid-twenties. Cocaine, pills, and pot mainly back then, and I didn't need them, though I did abuse them. My Mom was diagnosed with cancer and passed away in 2007(still seems like yesterday). That's when I begin using pills more often.

I tried heroin for the first time in 2012; I remember getting into fights with my husband because he was shooting it, and I was only sniffing it. I was so mad he was shooting it. We ended up moving out to Fairport and living above his dad’s, and that's where I shot up heroin my first time. It was a downward spiral from that point. We ended up losing everything; our kids included because CPS got involved. We were sleeping in trap houses, abandoned houses, friend’s houses or wherever. Our world revolved around heroin and making moves to get that drug, etc. I tried going to Syracuse Behavioral Health for detox, but I left because it was in my city. It was too hard for me at that point being there to stay clean.

While waiting to get into Loyola, in Bath, NY, I started using again.  I went to Loyola twice. The first time I went, I was gone 18 days (not long enough because it takes a month to "break a habit"). I got out and stayed sober two weeks and relapsed with my husband. We got some crack and heroin on September 24th. We both shot up, and I remember"coming to" half on and half off the bed, same as Justin.  At that point, I knew we were going to end up dead. I reached out to a few people letting them know what was going on and that I relapsed again. For the next week,  I called every day to get into Loyola Recovery Foundation, and I got the call on October 7th that a bed was opening and I could go there October 9th.

My sister picked me up in the morning to take me to Loyola.   I told her we NEEDED to stop so I could get a suboxone so I wasn't sick on the way there and she bought what I was saying. Once we got to the city, we stopped, and I went and copped Heroin and Coke. I went into an alley and shot up. Walking through those doors this time was harder, but I wanted it so bad. I hated who I had become. I missed my kids. I missed my husband. I missed my friends. I  missed my family... I missed caring and feeling! It was hard, and I wanted to leave! I was going to miss Halloween with my kids, and thankfully I talked to my Dad and sister,  and they helped me look at it in a different way. I will never have to miss another one with them if I stuck with the program. So I stayed. I was there 36 days total including detox. I'm pretty sure if I had left when I wanted to, I wouldn't be here to share my story with you guys.

This is the quick version too! I didn't think I could get sober. I didn't think I was worth it, but released I am. When I got home, I moved in with my sister, and being sober I found out what it was like on the "other side" waiting for calls, worrying, etc... I received one I dreaded January 12, and I stayed sober through it... So like I said before I'm 165 days sober.  I fight for my sobriety every day. Things are finally falling into place. It's not easy, but anything worth doing never is. Is it?


Posted by Fortifying Your Castle at 1:48 PM No comments:

She's Not Just an Addict; She's My Mom 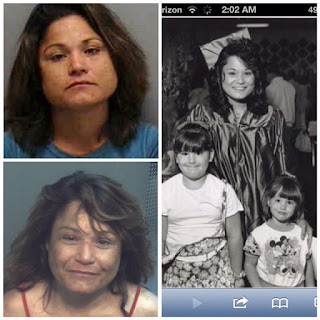 Breaking the Silence and Changing the System 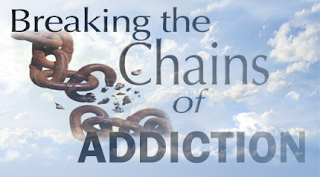